Howling with the wolves

We’re lucky enough to live 30 minutes away from the world-famous San Diego Zoo. As annual pass members, we don’t feel obligated to spend the whole day there to get our money’s worth, so we usually spend the morning checking out various exhibits, have a sit-down lunch to add to our zoo’s financial contribution tab, and go home for naptime.

What keeps the zoo visits interesting and entices us to renew our yearly memberships is the new exhibits that pop up on a regular basis. I’ve been living in San Diego for 12 years, and since then, I’ve witnessed the creation of amazing exhibits like the Ituri Forest, Monkey Trails, Polar Bear Plunge and the Elephant Odyssey. It always seem ironical that zoos were originally created to bring faraway animals for all of us to see. Today, they still have that purpose but have also found a deeper cause to address – the preservation of some endangered species. The (possibly naive) thought of “helping out the animals” with every zoo visit keeps us coming back for more.

This past weekend, we were lucky enough to enjoy special encounter with nature. The San Diego Zoo recently created an enclosure featuring arctic wolves. Unfortunately, the enclosure was empty at the time we walked by, causing obvious disappointment to my four-year-old son. As we kept walking, I saw the wolf’s dwelling at the end of the enclosure, featuring a tall wall with mesh fabric mounted to the top of it.

I once attended the zoo’s Wildlife Show where I witnessed a crowd of about 500 people howling with a wolf on cue. I thought the wolf knew he had to howl to get a treat, but I wondered if a wolf would howl without a large audience, and without any visual clue… 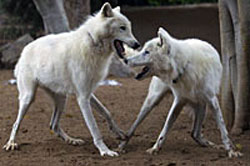 So I told my son the wolf probably was in his den and asked him if he thought he could make him howl. Without hesitation or embarrassment, he started to howl, using his cute little cub voice, over and over, relentlessly. After what seemed like a dozen howls and many dazzled stares from passers-by, I was ready to ask him to stop, fearing the wolf wasn’t there. Well, don’t underestimate the will of a child, because right then, our wild canine howled back in his deep voice! What followed was a series of alternating howls between my son and the wolf, only separated by a wall, to the amazement of those same passers-by. Some kids walking by giggled, asking their parents what animal was making that noise (hmm, where the heck are those kids from?), while parents themselves clearly were impressed by my son’s howling abilities.

The howling session went on for a few more minutes until it was time to move on. My son couldn’t wait to tell his dad and brother what he managed to accomplish, and I’m quite sure our next visit will include a pit stop to the same exhibit. Hopefully we’ll get to see our canine friend face to face then.

I can envision that one day my son will want to put together a list of “cool things I want to see and do in my lifetime”. I hope he thinks of this event and includes “Howled with the wolves – checked!”

What I love about summer 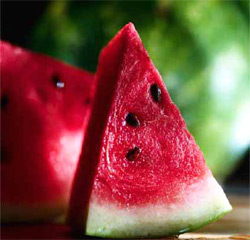 What to love about summer

As summer is quickly coming and going, I can’t help but think of all of the wonderful things the season brings. We all remember those summer days, when we didn’t have school for months, went on vacation far away from home, and played outside every day without a care in the world. Our adult lives are usually quite different, having to deal with demanding bosses and even more demanding kids!

So before summer is over, here’s a list for the memories of what summer is all about for me:

How to make a yogurt bunny – a klutzy moment

I have to admit this past week has been one of the most stressful times in quite a while for me. First my son had surgery to remove his tonsils and adenoids, which was followed by complications, causing a visit to the ER and a 24-hour hospital stay last weekend. Since then the recovery has been slow and painful, and as a parent you tend to feel so helpless when your child is in pain.

Then, there was work, where things went from bad to worse as the week went on. Steven Slater, the now infamous Jet Blue flight attendant, did something only a few of us would ever dare to do by quitting his job on the spot, in quite a politically incorrect manner. I’m not condoning his actions, but boy, do I understand how you could suddenly blow a fuse and feel like screaming, “I’m mad as hell and I’m not going to take it anymore!”

Finally, Friday the 13th came and things started to calm down so I thought I was finally on an upward trend, until Saturday morning came around… You have to know that I’m the officially crowned Klutz of the house, and probably the biggest klutz of the neighborhood. I regularly spill things, drop things, and break things, definitely more often than the average Jane (or Joe for that matter). So in a grandiose finale to a week that will go down in personal history, I experienced some of my best klutzy moments this weekend.

As I opened the fridge and reached out for the milk, I accidentally knocked over a Danimal yogurt bottle that somehow had been placed in the fridge without a lid on (I’m pretty sure I did that…). As the bottle bounced around on its way down, it spilled its contents all over the bottom part of the fridge and on the floor in front of it. I let out a popular expletive as a natural reaction to the mess I just created, when I heard my son behind me saying excitedly, “Mama, look! You just painted a bunny with yogurt! Take a picture for Papa to see!” I looked around and there it was, laying on the rug indeed, a cute bunny head with long ears, unlike the rest of the strawberry yogurt that plastered the fridge and the floor. So here you are, I did take a picture of it. Sure, it’s no miracle as it doesn’t represent the face of Jesus or the Virgin Mary, but I’m still impressed with what came out of that incident.

Unfortunately, my clumsiness followed me around a little longer. Just a few minutes later, I somehow managed to knock over my son’s cereal bowl all over his lap and the floor. All I can say is thank god he eats his cereal dry! And no, I didn’t take a picture of that…

To an overwhelmingly eventful week, here’s a never-too-soon goodbye!

Tonsils out, air in!

Last Friday my just-turned-four-year-old son had surgery to get his tonsils and adenoids removed. Technically the procedure is called combined tonsillectomy / adenoidectomy, but it’s quite a mouthful to say (no pun intended).

Why did we opt for the surgery? The poor little guy has had giant tonsils for most of his life, not a reason in itself to remove them surgically according to most pediatricians. However, he’s been a recurring victim of sore throats (the dreaded tonsillitis), strep throats, halitosis (bad breath), poor appetite due to back-of-the-mouth obstruction, and drum roll… sleep apnea. Large tonsils can indeed obstruct the airway and deprive a child of much needed sleep. The consequences of sleep apnea in children are numerous:
– Sleepiness
– Crankiness, due to lack of sleep (imagine sleeping four hours a night, every night…)
– Overall fatigue and lack of energy
– Poor concentration, ADHD
– Bedwetting

When my son started complaining EVERY morning after he got up that he was “tired”, I knew I had to do something to help him regain a healthy and active childhood. Even though today tonsillectomies happen a lot less often than 30 years ago, it was easy to get our health insurance plan to approve the surgery, due to my son’s poor physical state.

Now, my advice to all parents out there… Whoever tells you that tonsil / adenoid surgery is a piece of cake is either not a parent, or hasn’t had that surgery performed on them (and if they do, they just don’t remember it). Surgery IS surgery, and it comes with plenty of risks. There’s nothing reassuring in having to sign papers minutes before the procedure allowing the medical staff to perform transfusion if necessary, and indicating that your child doesn’t have an “advanced directive”. It only takes 30 to 45 minutes to perform this surgery, but that will feel like the longest 30 minutes of your life.

As for the recovery part, it’s no piece of cake (lots of popsicles, though!). As a parent, it’s physically and emotionally draining to see your own child in pain, and you know they’re in pain when they have a prescription for Tylenol with codeine. The two main things to watch out for are bleeding and dehydration. My son suffered from so much swelling in his mouth and throat that he refused to swallow anything by the day after the surgery. He ended up being admitted in the hospital for more treatment. He now feels a little better every day and I know that in a few weeks, he’ll have completely recovered, but in the meantime, it’s baby steps.

Now, am I hoping for a miracle cure with this surgery for all sleep apnea side-effects I mentioned above? You bet, at least for most of them! The proof will be in the pudding, and we’re stocked up on that too!

If your child has had tonsil and/or adenoid surgery, I’d love to hear from you.