a person with a highly individual or unique attitude, lifestyle, or imagination; nonconformist.

I love this week’s WordPress photo challenge, because it’s… me! And hopefully my kids too as they grow up. Our society tries so hard and so early on to have us conform and fit into the standard box. This hinders our personal creativity, imagination, and dreams. So many people just go with the flow, for fear of not fitting in. Fortunately a few of us fight back conformism. As my kids grow up, I want to remind them what Sting sang about in An Englishman in New York, “Be yourself, no matter what they say.”

Here are a couple of photos that illustrate the theme “free spirit” for me. The first one is of my eldest boy, running like the wind on the beach of Lake Hemet in Southern California. We ended up all running together, because it just felt so right.

The second photo is of me taken at the age of 23 in Paris, just before I left for Middletown, Connecticut, to teach French at Wesleyan University for a year. I love the blurriness, the wind blowing my hair all over the place, the pure happiness on my face. I was the first one of my family to move to a country 3000 miles away on my own. People here are often surprised when I tell them my story, especially the part about moving to another country all by myself. A free spirit allows you to do anything you set your mind to. And I wouldn’t change a thing. 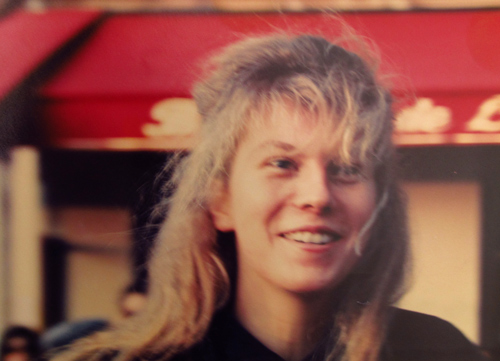 I’m skipping this week’s WWW Wednesdays update because I’m still reading  Mockingjay by Suzanne Collins. I’ve read some wonderful books with the kids this past week so I’ll share them with you in next week’s update.

I want to thank everyone who left kind, caring comment after reading Monday’s post. It wasn’t an easy one to write but I felt it was part of the healing process to lay down my thoughts and feelings about the situation. The blogosphere is a wonderful place to find support, no matter the distance that separates us all. I also found out it’s a place where you can get anonymous (i.e. from your in-laws) comments complaining I only tell my side of the story. Well, isn’t that the point of a “personal” blog? Honestly, I could have shared a lot more of the ugly parts but chose not to. Thank you, WordPress, for giving me the power to moderate comments on my own blog.  :-)

Today I wanted to share a health update (and what an update it is…) since I had my visit with the surgeon this morning. The doctor felt some of my concerning swollen lymph nodes and plainly said, “You’re fine, I see no reason to biopsy you. At least not now.” He added my lymph nodes didn’t “feel” like lymphoma and he’s been a surgeon for 30 years. Well, that’s reassuring.

Here’s how the protocol goes, if you ever find yourself in this situation. If your lymph nodes swell in various places, a surgeon will not perform a biopsy unless they are really swollen (as in 2cm diameter or more), or they are swollen and you have what they call lymphoma “B symptoms” (fever, fatigue, night sweats and/or weight loss), or some other signs you could have cancer, for example abnormal blood tests. My blood tests were all normal. He also told me not to worry about the swollen lymph node by my breast because the mammogram showed no sign of cancer. Oh, I feel much better now.  ;-)

The mystery illness – Where is Sherlock Holmes when you need him?

Lovely! Why don’t I feel relieved I may not have lymphoma? Because I don’t know what I have. And now I’m even more certain my kids have the same thing. The three of us have some “mystery illness”, which could be a bacterial, viral or fungal infection. With hundreds of possibilities and no other obvious symptoms to help pinpoint the culprit, the doctors probably won’t test us for anything more. Whoever tells you medecine is an exact science, don’t believe them. It’s just a guessing game, crossing off the possibilities as you go down the list.

So the anxious mom that I am will on a weekly basis feel her own lymph nodes thoroughly and do the same for both her kids. Gosh, I need a drink just thinking about it. After six weeks of swelling that is spreading from one area of my body to another, I’m starting to think they’re here to stay and maybe we should make friends.

Have you ever had an illness that doctors couldn’t explain? How did you cope (besides the obvious glass of wine or piece of chocolate)?

I’m making lemonade with all my lemons

You know the saying, when life gives you lemons, you make lemonade? Well, I’ve got plenty of lemonade to make because so far 2012 has been worse than 2011. The truth is, life can be a bitch (pardon my French but I can actually say that because I am  French). All that matters is how you deal with it.

In January 2012 my husband suffered a traumatic brain injury as the result of a skiing accident. You can imagine the event was very trying for our family. Fortunately he fully recovered after two months of intense treatment. But the recovery also meant he was back to his old self, and it wasn’t a good thing. I won’t say much in order to protect his privacy but for the past few years, he’s made my life and my kids’ lives very difficult and painful. There are just so many hurtful things he could do or say, and so many lies he could tell until I ran out of love and trust. I tried to preserve the appearances for the kids’ sake but when I realized the situation was unhealthy and unsafe for them too, my job #1 as a mother was to ensure their well-being.

So I asked my husband to move out, which he did relunctantly. He sought help for his many problems and now claims to be a changed man. I’ve seen the good, the bad and the ugly, and one thing I’ve learned in life is that people can run but they can’t hide who they really are inside. And it’s not pretty. My kids have adapted to the new situation quite well considering the circumstances, even though some days have been easier than others. My kids are really smart and have made the best out of a terrible situation. I’m so, SO proud of them. I’m proud of their resilience, their flexibility, their inner strength and their positive attitude in these times of insecurity. I hope they grow up to be wonderful, caring, loving men. They’ve earned it.

A month ago, my husband asked to move back in with us. So much damage has been done on my end, it’s irreparable so I declined. Soon after that, he apparently found true love. I also found out he’d been dating other women during our separation. Knowing this makes me SO glad I didn’t take him back, when I realize how little our 9-year-old relationship meant to him.

So I’ve been taking things one day at a time, focusing on healing and helping my kids being happy and healthy. I’m very, very blessed to be surrounded by wonderful friends and family, who have offered more help, support and guidance I could ever have asked for. THANK YOU ALL for being there for me in these dark times. I’m looking forward to plenty of brighter days.

But the brighter days are not here yet, because of the health concerns I’m now facing. What did I tell you about life being a bitch? It’s relentless! For more than a month now, my lymph nodes have started to swell, not just in the usual places but also random places, such as the back of my neck, under my collarbone and by my breast. Since my mom is a cancer survivor, the thought of breast cancer is always at the back of my mind. After a lot of probing and testing, I may be in the clear for this one, but I still have no explanation for the swelling. So I’ve had more blood tests and a neck CAT scan and as of today, still no diagnostic. The next step is a lymph node biopsy, which takes two separate appointments. Only the biopsy will clearly identify if I have lymphoma, some type of cancer, or something else. Lovely.

The weirdest thing, which may be “good” news for me or just a coincidence, is that my kids have slightly swollen lymph nodes all over too. Just like me, they have no other symptoms. The pediatrician just ordered a bunch of tests, some of them different from mine. She’s hoping the three of us actually have some kind of bacterial, viral or fungal infection causing these symptoms. I’ll be acting as the family guinea pig with my biopsy. I’d take an infection over lymphoma or cancer anytime. Only time will tell, and the waiting is the worst.

So there you have it, the cat is out of the bag. More than half the year has gone by and I still have hope the year will end better than how it started. My son is starting first grade today and I’m as excited and anxious as he is. Life goes on, and it’s up to us to enjoy the ride or not. As Leo Tolstoy once said, “If
you want to be happy, be.”

The song below is the one I think about every single day when it comes to me and my kids, and our situation. Because when life gives you lemons, somewhere over the rainbow “trouble melts like lemon drops”.

Paris is the very first thought that came to my mind when I found out the weekly WordPress photo challenge was “urban”. Not San Diego, where I’ve lived for the past 15 years. I rarely go to downtown San Diego and honestly, I don’t think I’m missing much. It pales in comparison to any other big American city.

As a European city, Paris is vibrant with history and culture. There are thousands of opportunities for great photos. Digging up through my old photo albums, I found a few pictures I took with my old film camera that reflect what “urban” means to me in my hometown. I apologize for the poor picture quality. The photos are old and I’m taking photos of photos…

Urban means the traffic on the Champs Elysees leading to the Arc de Triomphe. I love the Christmas lights on the trees. They’re look like they’re on fire.

Urban means the “bateaux mouches” on the Seine River, a relaxing way to catch great sights of Paris, including the Eiffel Tower.

And to me, nothing says more urban than the old man feeding the pigeons and the sparrows on the steps of Montmartre. It always reminds me of the old lady doing the same thing in Mary Poppins. What do you think about when you hear urban?