Nelson Mandela: I am the master of my fate, I am the captain of my soul

“I learned that courage was not the absence of fear, but the triumph over it. The
brave man is not he who does not feel afraid, but he who conquers that fear.” ~
Nelson Mandela 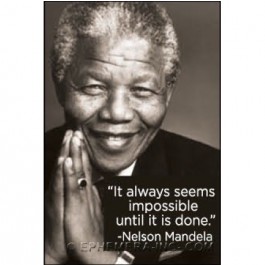 This is one of my favorite quotes by Nelson Mandela, which I found when I was reading his book Long Walk to Freedom: The Autobiography of Nelson Mandela several years ago. Like many people of my generation, I have a great admiration and I have found tremendous inspiration from this “simple” (he herded goats as a kid), yet so powerful man. While serving his life sentence in a high-security prison on an island with a similar setting as Alcatraz, he became THE symbol of political oppression, not just for South Africa, but for all the oppressed people in the world. His fortitude and resilience are what kept him alive, and his belief that peaceful, yet continuous attrition was the way to defeat Apartheid led to his liberation in 1990. I remember watching Nelson Mandela coming out from behind those prison walls, walking down the long road alone, as a symbol of his strength. After so many years of foreign pressure to free him, it seemed surreal to see him walking in the sunlight as a free man.

What’s even more inspiring about Mandela is how much he accomplished after he obtained his freedom. Already in his seventies, he worked with De Klerk to eliminate Apartheid once and for all, which led the two men to receive the Nobel Peace Prize in 1993. Mandela became South Africa’s first black president in 1994, something inconceivable just a few years earlier. 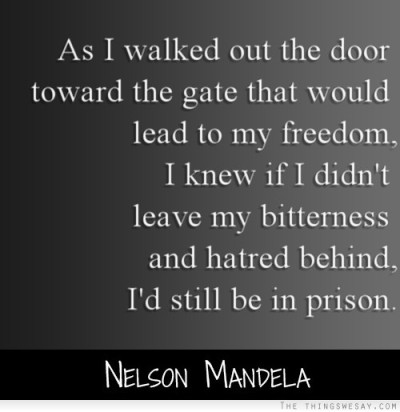 There are many books and movies about this amazing person, but my favorite has to be Invictus. It portrays Mandela’s first year as president, and his insistence on leading towards reconciliation, not revenge, as a way to unite his divided country as soon as possible. And one surprising way he did that was by insisting that the South African rugby team manages to win the Rugby World Cup, which was scheduled to take place in South Africa the next year. At the time, it seemed an impossible challenge, as that team happened to be the worst team of all world teams. You HAVE to see this movie to believe what Mandela was able to pull through. Don’t forget your box of tissues.

Nelson Mandela is the type of leader many country presidents aspire to be but will never become. That’s how you realize what a truly amazing Mandela was. One in a million. Today I am very sad to hear of Mandela’s passing, but I feel blessed to have had the opportunity to witness first hand this part of history. And one day I can tell my kids about it.

Invictus is a poem by William Ernest Henley. Mandela explained in the movie Invictus that reading this poem often while in prison was one way for him to keep his head high and follow his beliefs. When you read these words, you’ll understand how appropriate they are for him..

Out of the night that covers me,
Black as the Pit from pole to pole,
I thank whatever gods may be
For my unconquerable soul.

In the fell clutch of circumstance
I have not winced nor cried aloud.
Under the bludgeonings of chance
My head is bloody, but unbowed.

Beyond this place of wrath and tears
Looms but the Horror of the shade,
And yet the menace of the years
Finds, and shall find, me unafraid.

It matters not how strait the gate,
How charged with punishments the scroll.
I am the master of my fate:
I am the captain of my soul.

Tagged but the triumph over it, captain of my soul, I learned that courage was not the absence of fear, invictus movie, invictus poem, Long Walk to Freedom: The Autobiography of Nelson Mandela, Mandela dies, mandela freed from prison, mandela passes away December 5 2013, master of my fate, Nelson Mandela, nelson mandela quotes