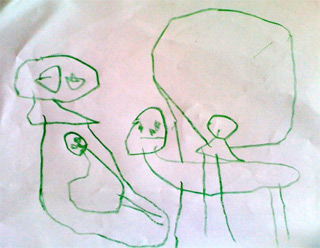 You know you’re a mom… when you get excited about a drawing from your children that nobody else would take a second look at! Yes, IAM, I’m A Mom, and I’m very proud of my almost four-year-old son. Why, you ask? Because the picture on the right is what my son drew last week, out of the blue. The young artist described the scene taking place by the pool  – the large circle on the right- with a child standing in front of it, and a diver below him. Yes, my son aspires to become the next Jacques Cousteau! Somehow they’re sharing the scene with the Martian on the left who captured an ostrich in a cage. Holy cow, it really looks like an ostrich!

Now, I know what you’re thinking. Cool beans, but that’s no masterpiece for a child his age. You’re right, I’ve seen other drawings from his preschool classmates and I can often figure out what they drew. But for my son, this drawing is a major accomplishment because it marks his light speed exit out of Scribbletown! You see, until he drew this “earth, water and space” theme, he only scribbled. Pretty, colorful scribbles, but unrecognizable shapes nonetheless.

How bad could it be? Look at the picture on the left and it’s hard to believe the same kid drew those two pictures only a couple of weeks apart, with no sign of transition. Somehow a lightbulb went on in his head as he realized he could use crayons to draw something different than never-ending spirals.

How fast do I want him to progress from here? I’ll let him take his time and discover art as a way to express himself, so he can find his own style over the years. Picasso famously said “Every child is an artist. The problem is how to remain an artist once he grows up.” Society so quickly wants to squeeze all of our children into the same pre-configured box that I believe our duty as parents is to give them plenty of breathing space at home to explore their own talents. So even though I’m happy to say au revoir to scribbles, I’ll let my little budding artist choose what he’d like to draw next. Right now, he’s way too busy playing with his dump trucks to pick up a crayon.