Every day I see a cow

Several years ago, while I was listening to a popular morning radio show here in San Diego, one of the hosts mentioned a surprising fact. He stated that every day, each and everyone of us sees a cow. I burst out in laughter! Are you kidding me? I thought, I live in San Diego, not Kansas! He went on to clarify that it may not be a real cow, but the image of a cow, anywhere around us, which would include billboards, magazine ads, TV, books, products, etc.

I considered “every day” to be an overstatement so I decided to do some fact-checking. Boy, was I in for a ride! That very evening, as I opened my fridge, there it was, not one, but two cows in there! One on the milk jug and one of the yogurt tub, both staring at me with their tender bovine eyes. As the days passed by, I started to wonder, could this really be true? Well, so far it really looks like it is…

I live in California and for those of you who don’t know, over the past several years, the state has been promoting CA dairy products. Yes, you guessed it, the stars of the TV, print and billboard ad campaigns, are cows. You can visit the Real California Milk website and see it for yourself. Oops, did you click on that link already? Hmm, I guess you’ve exceeded your quota of cow sightings for the day!

By browsing the site, I found out there are actually six breeds of dairy cows in California:
1. Black and white Holstein
2. Jersey
3. Brown Swiss
4. Guernsey
5. Ayrshire
6. Milking Shorthorn

Who knew milk came in that many flavors, even before adding chocolate or vanilla to it? I continued browsing the site and viewed their most recent ad campaign, as well as the Happy Cows TV commercials, including the audition reels. For the hard-core Real California Milk fans, there’s even an online store. I’m thinking of getting the happy cow plushies. My kids could make up their own cow dialogues (I’m guessing cow poop would come up pretty quickly in the conversation, since they seem to enjoy this body-secretion stage right now). However, if I purchased the black and white plushies, I’d end up seeing even more cows than I do right now, so maybe it’s not such a good idea…

Last fall, we turned off our TV cable service after we realized that we never turned on our TV (look for an upcoming blog entry on this one!). I then thought that my daily cow sightings would disappear. Boy, was I wrong! Even though we don’t watch TV  and the milk we buy now doesn’t feature a cow on its labels, I still seem to bump into the long eye-lashed bovines every day. Why? Simply because I have kids who read lots of books, and somehow many of them feature cows. Books on farms? Cows. Books on trains? Cows, staring at the trains go by. Books on oceans? Cows. Alright sea cows, also known as manatees. OK, I’m pushing it with this one, but you get the picture.

And there’s my local grocery store whose manager finds it hilarious to place a giant (yes, giant!) photo of a cow head on the wall right above the dairy department. OK, maybe I’m overreacting here and they’re just providing a simple visual clue to their customers to locate the milk, but still…

The other night, as I lay down in bed at almost midnight from a long, tiring day, I couldn’t remember if I saw a cow that day. That’s strange, I thought, as I grabbed a recent issue of Money magazine. I flipped through the pages when suddenly, there it stood, a huge cow in the middle of a full-page ad. Hmm, why didn’t I think of that, a “cash cow” in a Money magazine? I can’t believe I could be tricked so easily. 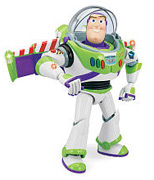 Recently, I started having daily sightings of another character. I have two words for you: Buzz Lightyear. Surprisingly, my kids don’t watch TV and have never seen Toy Story 1, or 2, or 3, but they sure know a lot about Woody and the gang! It all started a couple of months ago when my oldest son came back from preschool and started talking about Buzz Lightyear. I guess one of his little friends had brought a doll at school, and that was the catalyst for our new space adventures! This somehow coincided with the promotion launch  of the upcoming Toy Story 3 (playing very soon in a theater near you) and a revival of the movie’s characters in our favorite stores (particularly Target and Walmart). As curious parents, we’ve embraced our kids’ interest in the characters and we now are the proud owners of several plastic dolls, books and even matching Buzz Lightyear PJs (for the kids, not for us, I need to mention). As a marketer by trade, I’m flabbergasted by the power of store displays to influence purchasing decisions of both my kids and myself (who doesn’t want Buzz tattoos) and the abundance of supplies. As a parent, I love watching my two-year old son hold Buzz Lightyear in one hand, Woody in the other, and create his own story, which usually ends up with one character tackling down the other. I think Buzz usually wins…

So for now and at least for the next few months to come, I can say that every day, I will not only see a cow, but also Buzz Lightyear. Hopefully, not on top of the cow, not a pretty sight…

4 responses to “Every day I see a cow”